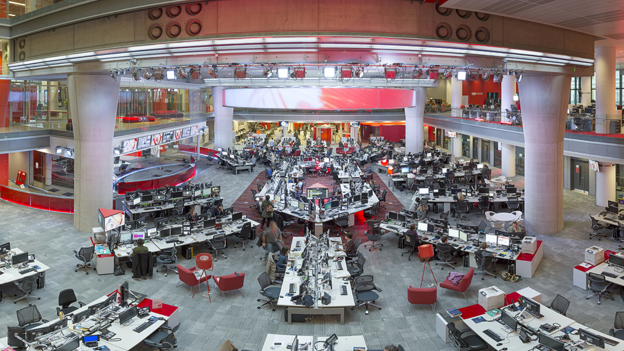 How do you do more with less?

That’s the conundrum the BBC News cuts announced today are trying to solve.

I’m not going to go into which posts are closing and whether that’s right or not – there’s still a lot of detail to come out.

But I would just flag up a couple of things.

Firstly the difference between the rhetoric and the reality. James Harding says he couldn’t find any fat to cut, and then demonstrates how much fat there is to cut. Back office savings are being implemented throughout this process – for example the closer integration of BBC World and BBC News Channel. A no brainer.

The other issue which leaps out is Panorama cutting staff reporters. On paper this looks like a sensible, modern move. Jim Gray is clearly thinking about the Dispatches model, where content is commissioned from independents, or in this case freelances, rather than having expensive staff sat around producing very little.

That sounds, and is, sensible.

But it will play appallingly. “BBC cuts Panorama” is the headline that its legion of press officers will now have to firefight tomorrow, and it’s the underlying perception it will now have to fight in the years until the next licence fee renewal.

That’s a tough sell when you’re expanding as yet unproven digital projects – look at this reaction in the New Statesman.

And there’s still the unresolved issue of cutting services licence fee payers use to support the expanding costs of the World Service, which they don’t. The BBC Trust also chose today to fire a warning shot on the closure of BBC3, pointing out the problems of reaching young, ethnically diverse audiences.

Broadly I approve of the strategy on display here. But when pushing for radical change, it wouldn’t do James any harm to look at bit more supportive of some of the best elements of the BBC’s legacy and to look as though he’s safeguarding the interests of licence fee payers.